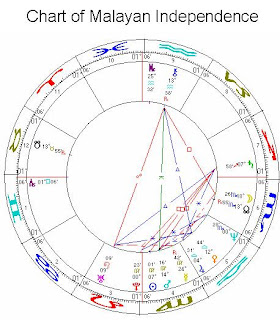 "Buried Alive" is the headline of the front page of today's newspapers. The article reports two thousand people trapped and four died as a result of a massive landslide near Kuala Lumpur yesterday. The disaster happened yesterday at 4 am when most people were still asleep in Bukit Antarabangsa.

However, yesterday's landslide want not the first to hit Bukit Antarabangsa. Landslides have clamed at least 64 lives around the area in the last 15 years including the four deaths yesterday. Geologists have issued warnings of the area's vulnerability to landslides, but developers have continued to build homes there and people have continued to purchase them. It sounds very much as if some forces of destiny are at work. It also behoves me to reflect on the issue to see if there is any astrological link.

I decided to use the chart of Independence of Malaya on 31st August 1957 for the analysis. According to Campion's "Book of World Horoscopes" this is the more popularly used chart among Malaysian Vedic astrologers. The chart is set at 12 midnight.

There have been five landslides in Antarabangsa in 1993. I have looked up the planetary transits to the national chart and they are as follows:

[1] Dec 11, 1993 - transit Nodal Axis conjunct ASC-DES axis; transit Pluto square MC; transit Saturn conjunct MC
One of the two Highland Towers condominium blocks Built below Antarabangsa collapses due to a landslide killing 48 people. The symbolism of the combination of Pluto, Saturn and the Midheaven aptly describes an event that involves massive destruction of structures with death that catches the public eye.The nodal axis is often a good indicator of the timing of catastrophic events.

[2] May 15, 1999 - transit Saturn square Uranus; transit Pluto trine Uranus; transit Chiron conjunct DES
A big landslide cuts off the only access road to Bukit Antarabangsa, trapping 10,000 residents for days. No casualties. Uranus signifies the sudden and the unexpected and this happens on solid structures as indicated by Saturn. Pluto is also involved but as a trine with Uranus indicating the transformation of the lives of many individuals. The asteroid Chiron signifies pain and suffering and its conjucntion with the ASC-DES axis is expected in natural disasters.

[5] Dec 6, 2008 - transit Nodal Axis square Nodal Axis; transit Pluto trine Pluto
A massive landslide mows through 14 bungalows, killing four people in the area. One person is still missing. Again, Pluto as the planet of power and intensity is invoved. The timing function of the nodal axis is again very well illustrated in this catastrophe.

The association of nearly all the above catastrophic events with either Saturn and/or the Nodal Axis is very suggestive of karmic relationships in action.
Posted by Your Astrofriend at 7:37 PM