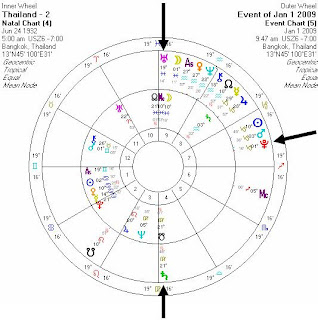 As I was watching TV this evening I was suddenly taken aback by news of the New Year Fire in Bangkok. Apparently at about 9:47 am this morning a fire broke out in a night club and by the time of the 11 pm news, 61 people died and more than a hundred were injured as a result of the stampede.

I immediately reached out for Thailand's National Chart cast for Bangkok and compared it with the transits for the day. The results are startling:
(a) Transit Saturn is in an exact conjunction with Bangkok's South Node; in exact sextile with Bangkok's Pluto and rules the 8th house of death. Saturn is noted to have just turned retrograde eight hours earlier at 1:08 am
(b) Transit Uranus is in an exact square with Bangkok's Ascendant
(c) Transit Pluto is in opposition to Bangkok's Sun within less than 1 degree orb.

Saturn signifies fear and morbidity, Uranus suggests suddenness and unpredictability whereas Pluto indicates powerful, hidden forces. All these are clearcut astrological significators of a sudden catastrophic event pointing to the presence of associated death and fear. There are two astrological timers here - the nodal axis and retrogradation of Saturn. Whenever Saturn or any outer planet is seen to be moving backwards in the sky it generally signifies the occurrence of an outer world event, in this case, the fire.
Posted by Your Astrofriend at 7:30 AM