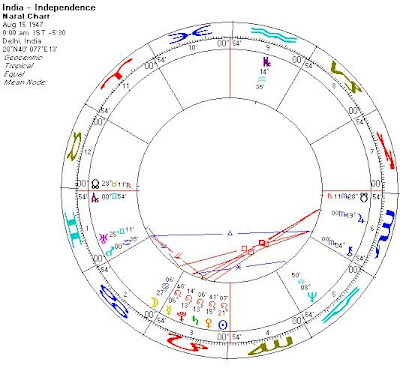 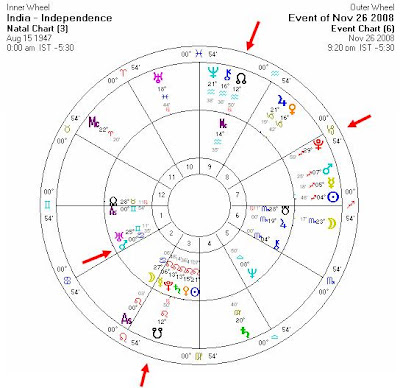 As the television news and the newspapers give their account of the attacks in Mumbai over the past three days, many of us follow it in a state of shock. With a major event in its capital city, India as a country seems to be under a major attack. Instinctively, I looked up Nicholas Campion's book on "World Horoscopes" to search for India's national chart.

Understandably it is not easy to obtain for a country the horoscopic equivalent of the birth chart in an individual. We simply do not know when a country is "born", so to speak. According to Michael Baigent's hypothesis, "the beginning of the period of taking of power" is the critical moment for which a national horoscope should be set.

India was under British rule for many years and it achieved independence from the British at 0:00 hr on 15th August 1947 in Delhi. Apparently, according to Campion there is evidence that the midnight moment was elected as the most auspicious time for the occasion. The chart for Independent India is therefore set for the above data.

The national Ascendant is in Gemini and Mercury as the Chart Ruler is in the 3rd house. Immediately what comes to my mind is the ability and agility of its people in mastering languages. What strikes me however is the presence of a Saturn-Pluto conjunction with the IC (Imum Coeli). It brings to mind that this is a nation that is very much tied to its roots, origin and traditions.

I next decided to use this National Chart for an analysis of the Mumbai attacks, which, according to the media started around 9:20 pm local time on 26th November 2008 with the Chhatrapati Shivaji Terminus Railway Station. And, as I cast a bi-wheel chart with the transits for the above timing, I stared at it with awe. Several astrological significators of a catastrophe are clearly present on the chart.

Firstly, transit Pluto is exact oppostion to India's Mars. Pluto is a planet of forceful, hidden power often accompanied by transformational change. Mars on the other hand is a planet of aggression, drive and often symbolises war. With the two planets in opposition, it suggests a major conflict accompanied by a major act of violence.

Secondly transit Pluto is at the verge of moving from Sagittarius to Capricorn, in fact, this happens only 3 hours later. In Astrology this is called an ingress and generally signifies a significant event.

Thirdly the Moon is moving into a New Moon Phase while transit retrograde Uranus is turning direct, both astrological phenomena being mirrors of outer world events.

Fourthly, the Nodal Axis, which is often used in Astrology to time events, is seen to be in exact conjunction with India's Saturn-Pluto-IC conjunction. It seems to tell us that this is a moment when India's sense of innermost self or identity is under serious attack.

Posted by Your Astrofriend at 6:12 PM