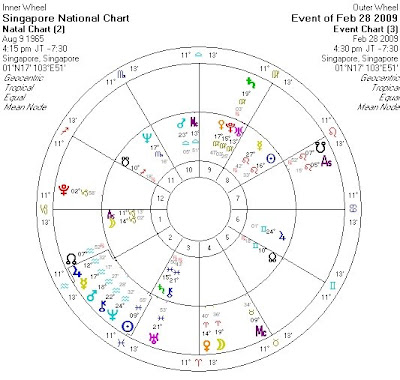 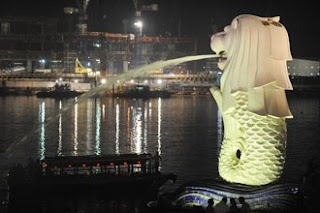 A biwheel astrological chart is cast for the moment of the event against Singapore's National Chart. Several significators are immediately obvious:
(a) Transit Uranus is at an exact conjunction with natal Chiron, indicating the suddenness and unpredictability of the event and the injury it has caused to the country's icon. Uranus itself rules lightning. Both planets are in the sign of Pisces, and Pisces is symbolic of the Fishes.
(b) Transit Mercury forms a T-square with natal Sun and natal Neptune. This is indeed striking as the Sun in a National Chart represents the government or the icon of the country. Sun is also the ruler of Leo which signifies the lion whereas Neptune is the planet of the sea and signifies the relationship of the Merlion with the sea. Furthermore as Mercury rules the ears, it is most apt that the Merlion's ear has been damaged.
(c) Transit Mercury is quincunx natal Venus and transit Venus is conjunct the natal IC. Venus is symbolic of statues and the damage done to this particular strikes at the innermost sentiments of the country.
Posted by Your Astrofriend at 2:18 AM

Whats does is mean in layman language ?